This Sunday, December 17th, we invite you to come by Right 2 Dream Too for our open house.

R2DToo opened up at our new location in June of 2017. Join us for snacks and hot beverages. Take a tour of our operations. Sign up to become a volunteer or drop off a holiday gift for your neighbors living outside.

When: 8am-4pm
Where: 999 N Thunderbird Way (across from the Moda Center, Max yellow line stop)
Who: Everyone is welcome 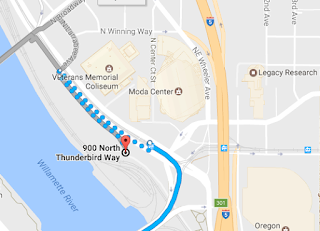 *This little map could be helpful. Thunderbird Way is runs parallel to Interstate Ave, but is a little tricky to access the first time. Our official address is 999 N. Thunderbird Way.
Posted by Right To Dream Too at 8:31 AM 11 comments:

Moving Day is on the Way! Sign up to Help R2DTOO Relocate


Hi everyone! It's only been a month since we found out we would be able to extend our stay on 4th and Burnside for up to two months and prepare for a very quick move to our new location near the Moda center.
During this time, we've been working with architects from Communitecture, LRS, and PSU's Center for Public Interest Design - on our site plan. Unfortunately, our site has been shrinking (more on this later), but we are working out strategies to make it work.
We will need lots of volunteers to help with this process. If you are interested, please feel out the google form with by pressing on the link below.
Our big work party weekends will be May 27th-28th and June 3rd-4th. However, there will be lots to do in between as well. When you fill out the form, let us know when you can help, and if you have a truck or any special skills.
Thanks!
Sign up to Volunteer!!!

Right 2 Dream Too Eviction Canceled; Agreement Reached with Landowners and City
For more than 5 years, Right 2 Dream Too has served the greater Portland community, not for monetary gain, but because sleep is a human need. We will continue to do what we do as long as there is a need.

R2DToo has been a good neighbor to the community and has appreciated the broad support we have been given by local businesses and the neighborhood organization.  Once we learned that the Portland Development Commission (PDC) acquired an option to buy the lot that we have been using (courtesy the landowners, the Wright-Cossette partners) for more than 5 years, we have been trying to find a new home.  Three times we found a reasonable relocation site and three times we were turned away by individuals, businesses and organizations who, out of ignorance and fear, refused to accept our presence, even as we committed to continuing to be good and safe neighbors.

Now, again, the City of Portland has answered our immediate needs by finding the Thunderbird site near the MODA Center.  We intend to continue to serve the people whose needs for sleep are being met by our peer run rest area.

Thanks to the landowners, the Wright-Cossette partners, for their extraordinary patience while we sought a new site.

Our new home, will not be close enough for people to walk around the corner or down the block for breakfast as they can now, but will be a short Max ride away. R2DToo has a grant through Ride Connection which will help many of those who use our facilities to travel to social service providers.

R2DToo gives thanks  to the generous support of the Wright-Cossette partners who allowed us to stay on their property for this many years.  We also applaud the many business owners and neighbors in Old Town China Town who, over time, came to recognize us as good and responsible neighbors.  Our supporters know that R2DToo has strengthened our community by providing restrooms (to housed and houseless individuals alike) and a place out of the doorways for houseless folks to sleep.

In the coming months, Right 2 Dream Too welcomes community support, both financial and in-kind,  as we prepare for our move. We will recreate a safe, secure, humane and functional space where people have the right to rest, to sleep, to dream. 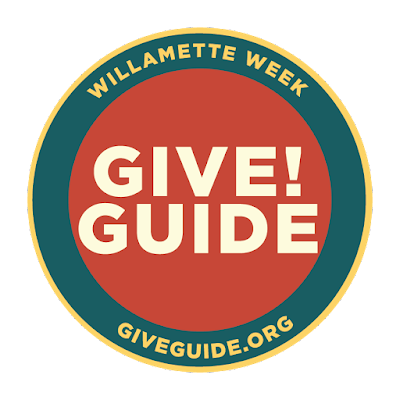 Right 2 Dream Too is Now
in the Give Guide! 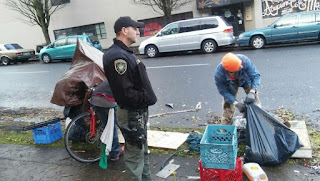 Portland, OR -  December 14, 2015 - Around 8:00am on December 10, 2015 private security guards and a crew from Multnomah County Sheriff’s department arrived at St. Francis of Assisi Catholic Church on Portland’s southeast side and removed the personal belongings of many of the people who were sleeping there on the grounds and sidewalks near the church.  Guards from Pacific Patrol Services and members of an inmate crew loaded tarps, sleeping bags, clothes, shoes and blankets into a truck and hauled it away in the rain. Temperatures at the time were about 48F, with winds gusting up to 26mph. 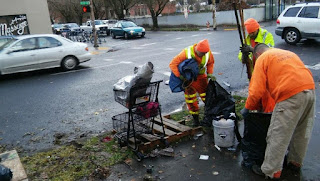 Ibrahim Mubarak, an advocate for houseless people and a founder of Right 2 Survive, received a text about the sweep as he was being interviewed at the KBOO radio station a few blocks away. Mubarak left the radio station and arrived at St. Francis at around 9am. Mubarak approached the sheriff department employee and said “You are sweeping people in this weather?  It’s supposed to be a state of emergency. They have nowhere to go."  Rainy, cold weather in Portland the three previous nights has caused flooding and home evacuations.  The crew leader denied that it was a sweep and said the crews were simply “cleaning” the sidewalk. Then he called the Portland Police on Mubarak, contending that he was being "aggressive". Police arrived, but did not arrest  Mubarak. As they talked, the police officer said that this was a sweep that had been ordered by East Precinct Captain Sara Westbrook, contradicting previous assertions by sheriff department representatives that it was not a sweep.  Mubarak reports that Valerie Chapman, the St. Francis Parish Administrator, was also present. Mubarak left St. Francis and went down to Portland Mayor Hales' office, where he conveyed the seriousness of taking away people's survival gear in this kind of weather.  Josh Alpert, mayoral aide, responded two days later in a text to Mubarak: "St Francis action is part of weekly maintenance cleanup of the area, no cites issued, people required to only relocate with the belongings they want to keep to a block away. Trash and unwanted items are disposed of. Campers generally return shortly thereafter. 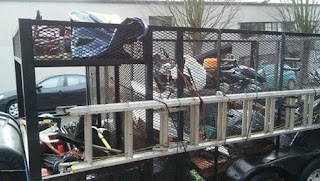 St. Francis supports the maintenance cleanings...  I'm largely ok with that, as long as people aren't being harassed and can still come back. However, I've also let all bureaus know that 1), unless emergency, no sweep or cleanup of weather is bad, and 2), for now, any proposed action must be approved by our office first- some are appropriate, but I want to know reasons, where, who requested, etc.” Portland Mayor Charlie Hales was meeting with other west coast mayors that morning in Portland. Homelessness was a key topic on the meeting agenda. Two weeks earlier the mayor was quoted in the Oregonian: "Our job in city hall is to try to help everybody where they are, whether they are in established neighborhoods and everything's fine, or whether they're struggling and they're trying to stay in their apartment, or whether they're houseless and living on the street." (http://www.oregonlive.com/multimedia/index.ssf/2015/11/mayor_charlie_hales_visits_haz.html)   Mayor Hales is also the Chief of Police. State ordinances require advance notice of any sweep. There is no ordinance regarding "cleanings". No one was arrested on that cold rainy morning, but Mubarak was outraged about the actions of the crews, especially during the rainy, cold weather. "No one spoke up about their stuff being taken because they were afraid they were going to get arrested," he said.  "It was Human Rights Day and this is what they do?" Mubarak posted photos of the sleeping bags and tarps being hauled away from St. Francis with this caption "go eat breakfast and come back to your stuff gone what a day time nightmare". (See attached photographs.) Right 2 Survive was founded in 2009 and is a direct action group that educates both houseless and housed people on their civil, human, and constitutional rights.  We also work to bridge the gap between housed and un-housed people by clearing away misconceptions and stigmas associated with houselessness and empower houseless people to stand up for them selves when their rights are violated.
Posted by Right To Dream Too at 6:03 PM 12 comments: 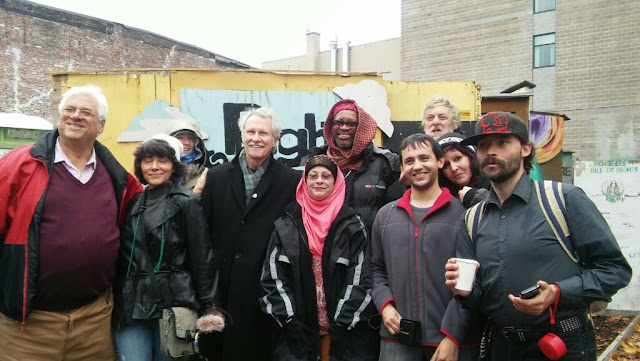 I Ibrahim, have been wondering do the big time Politician's  know about the injustice that goes on in the Houseless Communities. I know the Local politicians do, like the city Officials, the head of the Police, Mayor, the Developers, Business Improvement Districts, and the Neighborhood Associations. All are part of the small governments in cities. They impose unjust Laws on the poor, the criminalize the poor for exercising human rights. They even create monetary profits that the Poor do not benefit from. Look at all the Businesses and people that make money of off the Houseless. Hotels, Convenience stores, police officers, pharmaceutical companies, social services agencies, etc.etc. etc.
Last Month Ex-Governor Kitzhaber came to visit us at Right 2 Dream too/ Right 2 Survive. We talked about the crisis that effecting the people of this country 'cause of No affordable housing, not enough Jobs and jobs that do not pay a wage so people might afford housing. The pay wage should be $15.00 or More. We went out to eat after his visit at the Rest Area of R2dtoo. What I learned is that he was a health specialist. Well Kiss my Ankle! When you talk with people you find out what they are like, what they know and don't know, or what they think that they may know. He has a heart but that heart wasn't informed of the Health crisis's that Houseless people go through. Ex-Governor Kitzhaber didn't know about recuperating centers for the houseless. He seem surprised that the Hospital would service people and then put them right back on the streets. He asked me;" How can they heal?" Well, Well,  Well, Now He Knows. They don't!!!! So to my surprise he was stuck for words. As we finish our meal he took my business card, and you know like everything else I'll call you don't call me syndrome. Well to my surprise he contacted me and wants to continue or conversation about Recuperating Centers. . The ball is in his court again ,what will he do with it Pass or Shoot? Now,That He Knows.
_____________________________________________________________________________________
Posted by Right To Dream Too at 10:52 AM 8 comments: 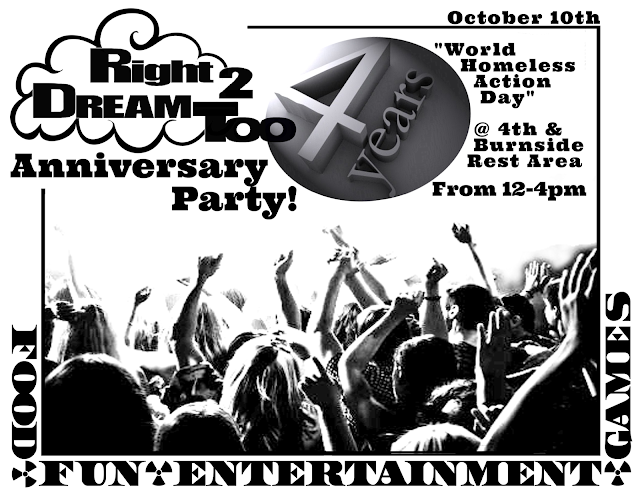 Right To Dream Too
Portland, Oregon, United States
Right2DreamToo (R2DToo) was established on World Homeless Action Day, Oct. 10th, 2011. We are a nonprofit organization operating a space that provides refuge and a safe space to rest or sleep undisturbed for Portland's unhoused community who cannot access affordable housing or shelter. We exist to awaken social and politcal groups to the importance of safe undisturbed sleep. Our purpose is to create a placewhere unhoused people can rest or sleep without being rousted by police or private security and without being under the threat of violence...

Or, donate your own amount

Special Thanks and Solidarity